On Friday 4th May the ground-breaking ceremony will take place in Šeduva, Lithuania, for The Lost Shtetl Museum and Memorial designed by Lahdelma & Mahlamäki Architects. The ceremony will mark the official start of on-site preparations for the construction of the 3000m2 museum, which will stand to remember and teach about life in what was a predominantly Jewish area – before local populations were decimated by the Holocaust.

The event will be attended by high-profile participants including the representative of the President of Lithuania Dalia Grybauskaite; Prime Minister of Lithuania Saulius Skvernelis; Speaker of the Lithuanian Parliament Viktoras Pranckietis; Minister for Foreign Affairs of Lithuania Linas Linkevicius; Christer Michelsson, the Ambassador of Finland to Lithuania, along with 13 other Ambassadors; as well as donors from Australia and the USA. Prof. Rainer Mahlamäki, co-founder of Lahdelma & Mahlamäki Architects and principal designer for the museum, will also be attending.

The Šeduva Jewish Memorial Fund, which is the driving force behind the unique memorial complex, had previously restored the historical Jewish cemetery at the site, which received a Special Mention from the jury of the European Union Prize for Cultural Heritage in 2017. According to the Šeduva Jewish Memorial Fund, it intended ‘to build a modern, state-of-the-art world-class museum to commemorate extinguished Litvak shtetl community history’.

The museum is the second built project of memorial architecture by Lahdelma & Mahlamäki Architects. The previous project POLIN, Museum of the History of Polish Jews in Warsaw, is renowned world-wide and was awarded the European Museum Forum’s Museum of the Year award in 2016.

In its original design, The Lost Shtetl museum is a modern abstraction of the traditional pitched-roof houses that made up the Eastern European local Jewish villages, known as shtetls. Each ‘house’ within The Lost Shtetl will have a distinct function, including exhibitions, galleries, learning and archiving facilities, and administration space. From roof to walls, the entire outside of the buildings will be clad in metal tiles that reference to the wooden shingles of the traditional shtetl houses.

The participation of the entire leadership of Lithuania at the ground-breaking ceremony for The Lost Shtetl Museum building demonstrates the significance with which Lithuania and the European Union relates to the new project. More than 96% of the once-large Jewish population of Lithuania (250 000, 10% of the Lithuanian population) was exterminated during Holocaust – a tragic record amongst all the countries which fell victim to the Second World War. One of the prime goals of the project is to restore the memory of the lost people and their rich culture that was systematically exterminated. The appreciation of this significance can be seen among all participants of this unique international project in which Lahdelma & Mahlamäki is a proud principal partner.

The event will take place on May 4th, Friday, at 10.00 on the site of the future museum in Šeduva, Žvejų g. 14 - two hours drive from the nation’s capital Vilnius. 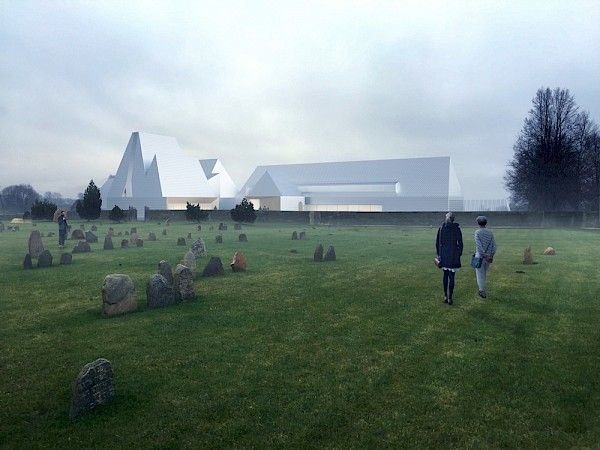